Over at American Religion I wrote about my book; about driving to convents in rural Kentucky back when we could still travel; about a place I just can’t get out of my head. That place–the Loretto Community in Nerinx, KY–is just one of a handful of convent properties I’ve traveled to in the past year. Read more here:

To trace the stories of Catholic academy girls in nineteenth-century America—girls whose white skin and class privilege, I argue, made them symbols of both U.S. Catholic aspirations and anti-Catholic nightmares—I started making convent road trips. Even repurposed convent academies are often remarkably maintained, and I am drawn to their parlors, porches, hallways, and anterooms… 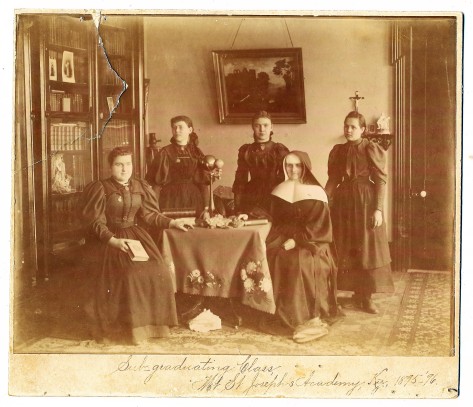 Join me and the Women’s Studies in Religion Program at Harvard Divinity School on Thursday, February 20 for my public lecture, Girlhood and the Making of American Catholicism.

While much of my work at Bryn Mawr moves my research on Catholic women and girls into the larger world of women’s education history — with a particular focus on the Seven Sisters colleges — this week I’ve been enjoying a return to my American religious history roots. With #PopeinPhilly just a few days away, I’ve been tweeting glimpses of the Catholic public culture I’ve been seeing around town (while carrying my Pope Tote, of course) and following Philadelphia-area colleagues who are using the occasion of the Papal Visit in their college classes.

Back in June, I was interviewed for History Making Productions’ new documentary “Urban Trinity: The Story of Catholic Philadelphia,” and last night I finally had a chance to screen the final product with some of the other contributing scholars. I was thrilled to see the hard work of producer and series creator Kate Oxx make its debut, and to watch so many friends and mentors share the story of American Catholic history with a broader audience.

As the trailer teases, “Urban Trinity” is a terrific film, and I’m proud to have had a (very small) part in its making! I’ll update this space when the film and additional educational materials go online, but if you’re in Philadelphia’s 6ABC viewing area, the first two parts will air tonight, Tuesday, September 22, at 7pm (and the third on Sunday, September 27 at midnight) before a sold-out World Premiere at the World Meeting of Families film festival Wednesday, September 23. For more information, visit the Urban Trinity website here, or follow the latest news from the production team on Facebook.

As I wrote in my dissertation acknowledgements (coming soon to a ProQuest database near you), my research is indebted to the interdisciplinary circles of scholars working on American Catholic history in Chicago and beyond, and I have benefited from the friendship and community of a terrific group of young scholars in Catholic Studies, one of whom, Mary Beth Fraser Connolly, was kind enough to talk with me recently about her new book on the Sisters of Mercy.